To Do: Build a PC with NO Moving Parts - Part I

Instead of my typical philosophical ramblings or technical diversions, I thought I’d use this post to reveal one of my recent hobby efforts: I built a 100% silent, no-moving-parts, passively cooled desktop computer.

Quiet computing has been a hobby of mine for about eight years. I guess it coincided with my desire to bring my PC into my living room, a home theater PC (HTPC). Off-the-shelf PC componentry gives little concern to noise levels – and bringing such a system into your family room is a recipe for a bad HTPC experience.

Consider that the typical desktop computer has 3-4 (low quality == loud) fans, a rotational/mechanical drive, and a CD/DVD drive. The goal for me, as the quiet PC designer, is to examine each noise making component and decide how quiet I can make it – while still producing a system that performs well when stressed.

As the years went by, I’ve built five custom systems and made numerous 'quieting' refinements to each. With each redesign, I’ve always wondered – would it be possible to build a system with no moving parts: no fans and a solid-state hard drive? This past January, after much research, I decided to give it a shot and build a totally silent, no-moving-parts PC.

One constraint I placed on my build was that I didn’t want to build a weak computer. Sure, I could have grabbed a Mini-ITX board with an Intel Atom, Via Nano, or AMD Neo chip – but these are netbook processors – and have just enough computing power to watch a YouTube video. Instead, I wanted a real desktop experience – a reasonably clocked quad-core processor.

Also, based on research, I learned that the Northbridge and Southbridge chipsets (on the motherboard) have a pretty high tolerance for temperature stress. Nevertheless, I figured I should make an effort to control these temperatures.

But here’s the real challenge: I want this system to be completely stable under 100% CPU loads. Not just a couple minutes of stress – but weeks.

A couple of items that didn’t worry me (okay, maybe a little) were the power supply and the hard disk. Power supplies have evolved a lot (efficiency-wise) in recent years – and it was fairly easy to find a reputable manufacturer with a fanless power supply. Also, solid-state drives have really exploded in popularity – and prices are now entering the 'reasonable' range. As such, I chose the Seasonic X-Series 400W power supply and the Corsair RealSSD C300 64GB solid-state drive:

Now on to the most difficult component of the build: the CPU. (Here is where I add my disclaimer: I’m an AMD fanboy. I know recent Intel chips are architecturally superior, but I don’t care. It’s a matter of principle – and I support market competition. So all you Intel fans have me to thank for having a couple good generations of Intel CPU’s – ha.) Surprise, I chose the AMD Athlon X4 615e. It is a quad-core clocked at 2.5 GHz and has a TDP of 45W.

Even rated at 45W (roughly the heat generation of a typical incandescent light bulb), I knew it would be difficult to find a good heatsink for passive cooling of the CPU. Also, this got me thinking about the case. If heat rises, my ideal design would employ a huge heatsink near the top of a case that had an 'open air' top. I found the perfect heatsink and the perfect case: a Scythe Orochi heatsink and the Lian Li Lancool PC-K62 case. 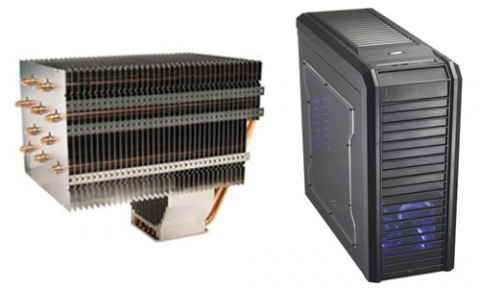 Last but not least, the RAM. With the above chosen components, I had already taken things to an extreme, so I decided to continue the theme and go with 4GB of G.Skill ECO low-voltage memory. These may only save 1-2W of heat over conventional RAM, but I figured every little bit mattered.

Bringing It All Together

As the story goes, I had to iterate a bit. To allow the maximum amount of ambient air around the componentry, I replaced the case’s plexiglass side panel with a 'custom' piece of Modright Modmesh (Maltese Cross design).

I also tried to do a 'reasonable' job with routing cables – which should allow for the best possible 'airflow'. ('Airflow' occurs naturally because the rising heat pulls fresh air into the case.)

The final touch: undervolting. I was able to bring down the temperature a couple degrees by slightly pulling down the voltage given to the CPU (from 1.1 V to 1.0875 V). This was a risky gamble – especially for reasons of stability – but I played it and it worked.

Next post: I'll wrap it up with photos of the PC, runtime performance details, and final thoughts.