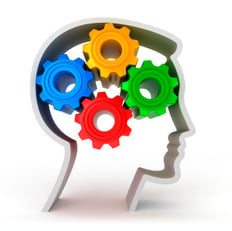 The odds are you’re good at what you’re good at because you like it. You’ve spent your extra hours thinking about it. You dream about it. And what more, your peers and your boss recognize you as a leader on the subject. Feels good, doesn’t it? It stands to reason, then, that if you spent even more time improving what-you’re-good-at, even more recognition and good feelings should result, right?

Let’s take a step back. Think about the leaders in your organization. How would you describe their best qualities? I bet you would say things like "sees the big picture", "stands up for my needs", "treats me with respect", and even "funny". Did you say, "They’re super technical"? Maybe, but rarely.

I agree with Daniel H. Pink’s perspective in A Whole New Mind: Why Right Brainers Will Rule the Future, that almost everything about the manner in which we’re schooled, tested, and even interviewed – is left-brained: quasi-robotic memorization of facts, standardized testing, and strict analytical thinking. I find this odd because the human qualities that are typically possessed by organizational leaders are right-brain qualities: empathy, big-picture-view, seeing relationships, and humor. You probably wonder, then, like me: why the dichotomy? I mean, if we want more first-class leaders and thinkers, why do we only teach and measure in a pure left-brained fashion? The answer is easy: because for the most part, we’re lazy.

I have a saying: if it’s easy to measure, it probably isn’t a good metric. Think about that for a second. Of course there are some exceptions, but for the most part, it’s true. Take for example the definitive standard for college admission: the SAT. I understand the societal desire to provide some kind of measure – but holistically, the SAT measures just a couple mental abilities, leaving hundreds unmeasured.

Another classic measure of intelligence: IQ testing. As Malcom Gladwell tells in his book Outliers, having a super high IQ does not correlate to being super successful. In fact, above an IQ of 120, there is no correlation between an individual’s IQ and their measure of success. The compelling case made by Outliers is that the super successful are the result of a combination of factors:

Judging a person using left-brained aptitude tests is easy – it allows for quick ranking and decision making - but don't stop there. Talk to them. Listen to them. Analyze their perspectives and philosophies. Challenge them and see how they react. Measure their internal drive. Ask them to explain something using a 'big picture view'. Look for a sense of humor.

Being left-brained is comfortable. It is how all of us have been raised. It is built into our programming. So you know what I say? Go get your 10,000 hours of expertise as quickly as you can. You’ll fit right into what society expects and rewards – and there’s nothing wrong with getting a paycheck. However, once you get there, you have a decision. You can either stay left brained – or challenge yourself to take the “road less traveled” and use both sides of your brain.

The funny thing is this: with practice, you can switch between focused left-brained activities and big-picture right-brained thinking quite easily. By doing so, you harness the best of both worlds – and you will create amazing Products that strike a balance between being very well engineered and yet highly usable, testable, and ergonomic.

Shenk, David.  The Genius in All of Us