Thoughts on Agile: What happens to six developers locked in a room together for six weeks? (Part II) 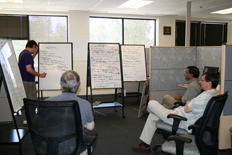 So Stefanie's right; but a slight introduction before the criteria. We were floundering big time with Agile. Our original belief was a take-no-prisoners, do-everything-the-book-said, all-R&D strategy. What we ended up with were endless meetings and mind-numbing philosophical debates on “what Agile really was”. It didn’t help when we heard outside sources say, “well, I’ve seen it before and it was like this”. But these outside sources were hapless in helping us install it at Spatial. I personally felt we were chasing a ghost.

So this is what we did; first, we carved out one significant 'delivery' of R&D that needed to be done by the next release (later to be called an epic). I let the rest of the R&D activities, the smaller miscellaneous ones (bug fixes, minor enhancements), go on their merry way un-encumbered with Agile. I assigned six people to this epic delivery, for a six week duration (later to be called a sprint), and gave them the following conditions and promises:

#1 You will work on this epic and this epic only. No more having a delivery team schedule a bunch of disparate activities for an iteration; minor bug fixes, major project work, along with all the other crap that happens in the daily life of developers. If someone in the group was a specialist that only knew a certain area of code, I would prioritize whatever needed to done on that code later. Or, I would MAKE someone else (not on the epic) learn on the job. (This is why, largely, we only did this with a subset of our R&D staff.) But the major point was to allow them to do Agile on one specific epic, and to not be interrupted!

#2 You will all go in one room and you will not work from your offices or cubes. BUT, and this is very important, we will never, ever, take your private office or cube away. (I had to get a personal promise from our CEO.) It was this condition that started our notion of a Team Room.

#3 The epic will be well defined and relatively narrow or specific. I wouldn’t let an epic (or team room) start unless we had some reasonable definition and a prototype worked out. These prototypes might have been done individually or by a small group of people, but we had a pretty good idea of how we wanted to solve the problem before the team room started. Hence, it was reasonably well-defined and the group could start running on day one.

#4 All the resources needed for the epic will be in the team room. There were to be NO external dependencies. I didn’t want to hear, “we’re blocked, Fred from the blah-blah group needs to deliver this code before we can move on”. If Fred had something that needed to be done for that epic he was in the team room for the entire six weeks. (This meant it was his ass on the line as well). This included QA, documentation and a position we created called, 'Team Room PM'. The Team Room PM was the priority man. He was on the team and made all final decisions. (But to be sure, the epic was planned and scheduled by the higher level PM group outside of development.) This did mean we had to well think-out who was to be in the room. (Hence, number three is important).

#5 It ends in six weeks. After its over, you can spend time working independently; prototyping future epics, scanning code, fixing bugs, reading, and most importantly, thinking. You can go back into a team room when the next one starts and you’re ready.

#6 If you fail, fail quickly and decisively. I’m a big believer in having an environment where people feel 'safe to fail'. It’s not that I wanted epics or team rooms to go bust, its more I wanted transparency. We work on a very complex and difficult piece of software. I’ve had what I thought were great ideas that didn’t pan out, and if they didn’t, you had to be man enough to say, “well, rats, that didn’t work”; and management needs to know when to stop feeding a dead horse. (Of course, the horse could be the project or you!).

#7 Lastly, the rest of XP and Agile is up to you. Pair program, don’t pair program. Unit test, don’t unit test. Play planning poker, don’t play planning poker. Decide your own iteration schedule, one day iterations, four day iterations, one hour iterations . . . I don’t care! This might have been exhaustion on my part, but this is where it all got interesting . . . all the things that we were trying to force earlier, especially pair programming, teaminess (not a word); now happened naturally. We didn’t have to force them or set up goofy metrics to measure how much we were adhering to. (One brain-dead idea from the first year, was to award an iPad to the developer who logged the most pairing hours.)

You’ll have to wait for the next post to find out!