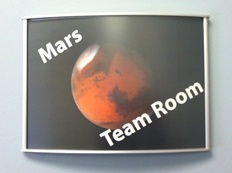 To finish up this series of posts; what Gregg's post described happened a few years ago. Since that first team room, we've kept and dropped some Agile practices, and each development team has evolved their own processes. But the original idea has stuck. He did have to coerce developers into the room the first time. But it worked. Why? Because he correctly identified the criteria for making them successful, and well, I guess people liked that.

Now most Spatial developers still work in teams rooms . . . but by choice. Some occasionally, some full time.  I guarantee that if you walk past 3 empty developer offices, they are huddled together over laptops somewhere in a dark conference room - and Gregg is often with them, skipping a meeting. The rest of the company got so fed up with not having any conference rooms, so they built a custom team room for the die-hards. In that first team room, Spatial had its first real breakthrough on getting a multi-threaded ACIS API to scale well (api_entity_point_distance), something we'd been trying to do for years. And I believe there may have been a few unit tests written too . . .