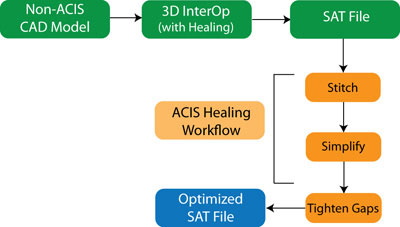 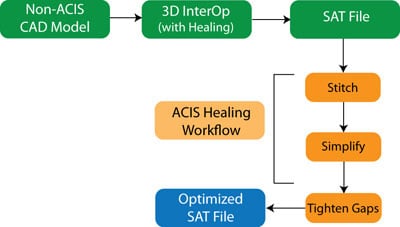 Though required in many workflows, translating files is not a simple task. Below are three essential functionalities your application must have to correctly translate 3D data.

One aspect of model translation that may appear trivial, but can have a large impact on the
results are units.

Although most geometric modelers are designed as being unitless, a CAD document usually interprets the data as having a specific model length unit that specifies the meaning of the dimensions of the geometric objects within that container.

In other words, it is the document that dictates the actual lengths being represented by the unitless values used by the modeler. This value is, in turn, used to interpret the tolerances of the model.

The healing functions within 3D InterOp comprehend these differences and properly interprets the meaning of unit during model translation and healing.

Another issue that can arise during model translation is a geometry that is too small for the target system. These features need to be removed before healing and translation can begin.

A sliver face is defined as a feature whose distance between long edges is smaller than
the specified tolerance, which has at least one short edge and, at most, three long edges.

The input file for a 3D model might contain bad data, which can result in corrupted information
in the resulting translation. Specifically, due to the differences in modeling kernels, valid data
created in one system may not be considered valid when imported into another kernel.

In addition, the geometrical or topological errors might occur during the translation process due to differing interpretations of the data. To ensure precise and valid translation, 3D InterOp provides this option for repairing and healing the translated files.

During translation, 3D InterOp’s healing corrects the differences in precision of source and target entities.

More on How to Develop Applications with 3D File Interoperability:

3D InterOp performs automatic healing in three areas with the goal of creating a model with
high enough quality to be correctly interpreted by the modeling kernel and retain fidelity to the
intent of the original model: