The Impact of 3D Modeling on Airway Splints and Stents

We have written about the growing role of 3D modeling and printing in medical applications before, and its impact on improving people’s lives. But this technology holds ever greater promise in enabling life-saving procedures.

In past blogs, we have covered powered prosthetics developed by the Biomechatronics research group at MIT where the lower-limb must be modeled to understand the internal structure plus the strength of individual tissues and muscles used to control the limb. So while the basic limb is a standard construction, the attachment and sensor structure must be modeled and manufactured for each client.

We have also discussed how mass customization will extend to the operating room where surgeons will insert coronary vein stents and replacement joints customized to fit the patient, and that soon, patients will have their affected arteries and joints 3D modeled to determine the exact configuration and size needed.

Current airway (tracheobronchial tree) stents are relatively crude affairs consisting of Y-shaped tubing with some sort of mechanism to hold them in place. They appear more like something out of your car rather than a medical device. Because these stents are simple in construction and are only approximately fitted, they can move within the airway, reducing their effectiveness. Or worse, the stent can become blocked with mucus or cause the formation of new tissue around the mechanism intended to hold it in place.

The shape and size of these stents can be customized, but it requires measurements to be made of the patient and then communicated to the manufacturer. This process can takes weeks until a new stent is delivered and still results in a less-than-perfect-fitting stent. And of course there are always cases where a patient cannot wait.

3D Manufacturing Taken to the Next Level

Enter Dr. George Chang of Beth Israel Deaconess Medical Center, who saw the potential application of 3D modeling and printing to develop customized stents that end the fit issues of current solutions. Using a grant to fund the project, Dr. Chang assembled a diverse team to tackle the problem. The first challenge the team encountered was that no 3D printer could handle the medical-grade silicon needed for the stent. The solution was to 3D print a mold that could then be used to create the needed stent out of the proper material. Based on that realization, the team wrote a program to take a 3D scan of a patient’s trachea and generate the needed mold. Not only is the new stent a perfect fit, functioning much better than previous commercial stents, but the time to generate the stent takes only a matter of a few days.

There is an interesting spin-off of Dr. Chang’s work: the molds made for patients represent a very realistic training device for pulmonary physicians learning to perform bronchoscopy. Not only are these molds much cheaper than the current training models used, they capture all the details of a real tracheobronchial tree.

Dialing It Up to Eleven

As impressive as the pioneering work of Dr. Chang is, it basically replaces an older style of stent. But for infants suffering from tracheobronchomalacia (or TBM), the only current treatments are complicated surgeries and constant ventilation and monitoring. Even with the surgeries, the chances of an infant surviving are not good. However, those that do survive grow out of the condition by age three.

TBM is a condition where the airway is compressed due to internal organs pressing on a weak tracheobronchial tree. While a stent might be an obvious solution, there are two major challenges:

The team of Scott Hollister, PhD, Glenn Green, PhD, and Robert Morrison, MD, from University of Michigan, Ann Arbor, came up with the concept of a 3D printed splint (surrounding the trachea) that grows with the patient. Moreover, the team wanted to create a splint that was bioresorbable, meaning it would just be absorbed into the child’s body within a couple of years, obviating the need for a surgery later to remove the splint.

Courtsey of the University of Michigan Health System

The solution starts with a 3D model built from CT imaging taken of the infant’s airway. From this model, a 3D-printed model of the child’s tracheobronchial tree used for fitting is created, along with the splint itself.  The splint is printed using a biopolymer called polycaprolactone, which is not only biodegradable, but also inexpensive. The resulting splint is then sewn around the child’s trachea, supporting the trachea until it grows stronger.

The results are amazing. The first operation using the splint was performed in February 2012 on a small child whose only alternative was suffocation. As soon as the splint was installed, normal breathing returned. The infant was removed from a ventilator after 21 days and was able to return home, displaying no signs of breathing trouble. Considering that TBM affects 1 in 2,200 infants born in the US, the number of saved lives will be enormous.

Continuing into the future, we can expect to see these types of 3D modeling and printing based solutions to create bioresorbable stents and splints to address various conditions, offering 1,000s of patients new hope. 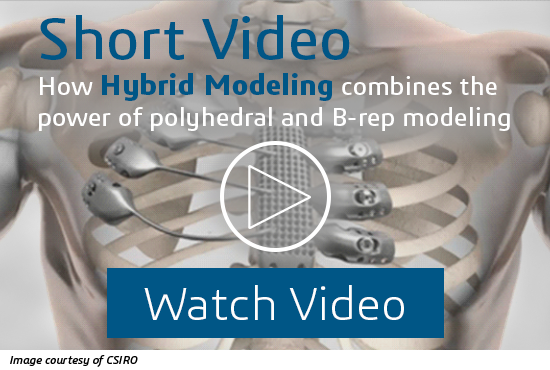