In my last post I constructed a thin walled 3D body of a teapot from surface data using surfacing operations.  Whilst the code I used worked it was more complicated than I expected when I started, so I took a second look at the workflow.  Once again here is the description of the input data: 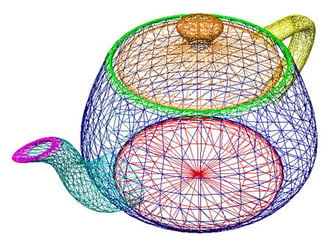 The simplification I came up with was to convert my model to 3D as early as possible, before cutting any sheets or thickening.  That way I would have to do much less work myself and make use of the solid based algorithms already built into the geometry kernel.
Remaking the Teapot

Remaking the Teapot
With this in mind, the first thing to note about the surface data is that the sides of the teapot stop in a horizontal plane, top and bottom, which makes it very easy to construct a solid from them by closing the volume with planar faces.

Those of you familiar with the Utah teapot might know that the original data set did not have a base, which was added later and some people view it as impure.  I did not use the base for two reasons; firstly the surface patches exhibit the high curvature making them harder to shell out to the required thickness, but finally it was the existence of the curvature at all; I have never seen a real teapot which has a curved base.

The workflow I was interested in was relatively straight-forward with what proved to be a very clean data-set.  Using sheet body operations I was able to complete the workflow but there were some issues that were not immediately obvious when I started.  However converting the whole problem into 3D solids as early as possible removed the ambiguities of “inside and outside” and used the geometry kernel in a more elegant way with much simpler code.