A major benefit of constructing a building virtually is the cost savings gained by identifying errors in the design before they are found on site. One of the more common errors that can be avoided is when two objects overlap in space or clash. For a beam that should stop at a wall may have been wrongly dimensioned so that when placed on site, it passes through the wall. Right through or only partly through, either it is very costly to fix if it is only identified as the wall is being built

traditional approach to resolving these issues is with 2D drawings and tracing paper —a manual, slow and error-prone process. In complex the clash may well be missed and likely a more expensive situation to resolve on site too. in modern BIM systems, the 3D representation of the building in software lends itself to automating clash with many CAD products or even with available clash analysis applications.

When implementing geometric algorithms on a BIM dataset, it is worth remembering that there is likely to be a lot of data. A function that works between two blocks in an experiment may be very slow when repeated for a whole block of flats with 10s of thousands of structural elements. 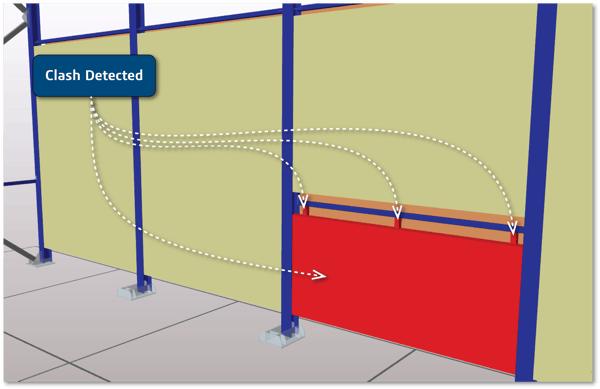 intersection in geometric terms will give you “a body that contains all points that are common to both of the two input bodies.” Maybe surprisingly, Boolean intersections can be a very expensive calculation, so while it is very useful if you know that you need to make a hole in a wall to place a window, it will be a slow mechanism to search for clashes in an entire building.

At a geometrical two bodies are clashing if there is a point on one body which is within a tolerance of the other body. Geometric clashing as faster than the Boolean as it will tell you about the interactions between two bodies without calculating the volume of . A full clash detection will identify all the pieces of the bodies within the tolerance, though in many cases, it is enough just to detect that a occurs and stop at that point, simply returning a true/false answer.

Finding out how the bodies clash can be quite slow, but identifying that they don’t clash is very quick in most cases. The bounding box of a body is simply a cuboid that represents the minimum and maximum in each of the three ordinate directions. To check that the boxes do not clash, all that is needed is to check that each of these three ranges not overlap, which is usually the first stage of a clashing algorithm.

In general geometric modelers have limits in their dynamic range: the lower end is the smallest distance between two points before they are considered coincident, and the upper end is the largest model size that the modeler can handle. These limits are imposed by the accuracy of floating point arithmetic in computers. Most BIM projects will be made up of a very large number of components, where each component is of a size easily modeled; however, those components can easily be placed kilometers apart, especially in multi-site projects. To avoid geometric errors from large coordinate values, applications create geometry in the component’s object space and keep associated transforms in the assembly data to position the models in the site coordinates.

An additional optimization that is often used with such an assembly structure is to keep the bounding box of each component in the assembly data. The bounding box consists of the range of the model in X, Y and Z, so it is very quick to check for a no-clash condition between two bounding boxes, and then do some additional checks if the boxes overlap. Performing a large number of these no-clash comparisons with such simple data objects is easy to parallelize in software.

To check clashes in a large BIM dataset, it is much faster to start by performing a simple no-clash check and then look in more detail at the cases that may have interactions. For working with large data sets, a scalable solution can be achieved by parallelizing the bounding box comparisons.

These Stories on 3D Modeling